Top 5 Social Media Marketing Trends to look for in 2017 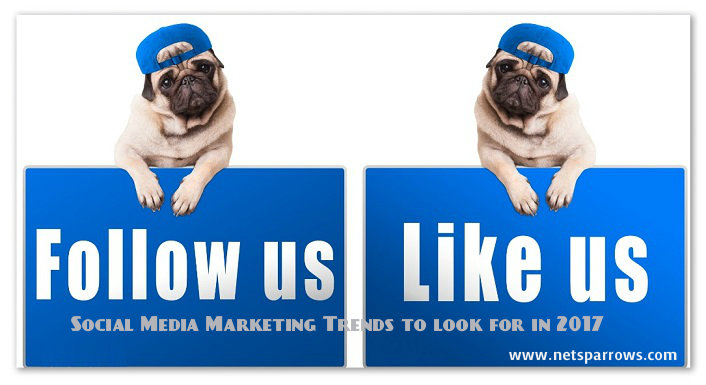 Top 5 Social Media Marketing Trends to look for in 2017

The popularity of social media is ubiquitous and is all poised to grow even more in the coming times. If stats are to be believed, alone in 2016, 2.3 billion users became active on the social media scene and above 1.9 billion turned up to mobile apps for connecting through their social media profiles. Not surprisingly, this huge surge benefited around 83% of the people in 2016, through social media marketing in terms of high sales and brand identity. In the year 2017, some more of the social media trends are likely to give added advantages to the seasoned marketers. Here are top five of these:

1.      Streaming videos: Ahead of posting images and texts, the modern day tech savvy generation has switched over to live video streaming for marketing. For sure, YouTube holds the lion share in this trend, with 48% of marketing professionals mulling at enhancing their content strategy with YouTube. In addition, Facebook Live videos, Instagram Stories and Twitter Periscope are other major live streaming services to watch for in 2017.

2.     Chatbots: This service helps users to interact with others through a chat interface, such as the chatbot embedded with Facebook Messenger. Social media networks are leveraging chatbots to help them in data retrieving and automating tasks. Organizations can use them to respond to user queries hence ensuring an improved customer experience.

3.     Mergers of social media channels: Throughout 2016, collaborations between popular social media platforms have been a norm, such as the merger of Whatsapp, Oculus Rift, and Instagram with Facebook, and acquisition of Periscope by Twitter. We may expect more of such mergers in 2017 as an increasing number of startups are finding it hard to cope up in the mainstream. This will also influence the performance of marketers.

4.     VR & AR: Notably, the Virtual Reality and Augmented Reality concepts have been highly successful in 2017. The example of Pokemon Go that introduced AR to the world is the best in this regard. While Facebook has already started experimenting with masks and lenses in Facebook Live, it will surely remain the topmost contended to run AR applications.

5.     No more organic traffic: Social media marketers might also observe difficulties in extracting organic traffic for different channels in 2017. This is because most of the networks have tweaked their algorithms to compel the marketers focus more on paid advertising over social media. Hence, it is wise for businesses to adopt alternatives like SEO, email marketing as a part of digital marketing strategy, along with social media.

Get best offers/ packages on social media optimization at https://www.netsparrows.com/social-media-optimization.html